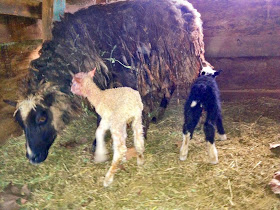 
Guess what? And they're not chicken butts. Well, we have two  rams and that's close in size. Our little ewe, last out of the chute is pretty weak...

These pictures were from this morning. The lambs still haven't unfolded yet. The little one was too weak to stand, but she's loving my bottles now and her mama doesn't like me to hold her one bit. I'm thinking she'll be nursing by the early morning. Still going to check on her more tonight. Her legs look weird in the picture but they're just crooked because she flopped-down. She's not hopping like the other two, but walking around and snuggling with her brothers. I've been out by the pen all day. Thankful too, that the momma ewe isn't just fluffy, she's fat. It's all there to make sure she's got enough strength to feed three little lambs and now I hope the third little runt will live threw the night.

The white ones are really, really white and really, really dirty. I don't think we've ever had an even mask on like this one and he's got a spot on his ear and one on his foot. They're covered in lanolin and they smell so good and so different than another other animal. Just a thought ... I'm sure they think that way about me, too! Hey, and it's probably not good.


St. Patty's day has brought a lot of surprises over the years. I ditched church : / 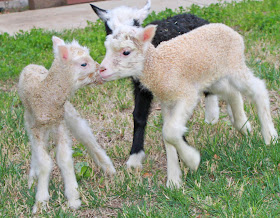 I've been watching and found the other placenta. Freaking-me-out...two rams are different colors and the other white ewe lamb couldn't be a twin. I went out to the pen and found the other placenta. "Handsome," our daddy-ram was guarding it. This is the weirdest-part....He's my favorite of all the sheep! I pet, scratch, and love on him all the time--he follows me everywhere. I reached for what I needed to trash the placenta and he rammed me. Not hard, but constantly--it wasn't a baby! But, I did take his ewe and the lambs to the barn. I think he's ticked. Weak little ewe had about another 4 or 5 Tablespoons of colostrum. Hey, my "stash of gold" is in a pop bottle with a "Pritchard teat" on the top. Leprechauns knew what I needed! 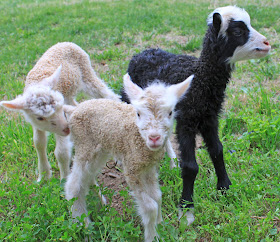 We have the sheep for wool and they're the real fluffy ones not for meat and the breed is Finnsheep. They are prolific, friendly, not huge, and the best of all, lots and lots of wool every year. We don't like to eat lamb or mutton, but I guess if I was hungry enough as in an emergency, I would eat the big white ewe. Never-mind she's too old. Fine Irish person I turned-out to be, I hate to eat sheep.

I have one more to lamb and her udder isn't quite full yet. I don't think the younger ewe bred with Handsome. Then, I have a young lady coming to shear them all (all but the bitty ones) I'm so excited because I need the wool. I think I'm going to do some felting. Very fun and I've got the stuff. This new girl is taking Mr. Bunch's place, shearing. Yay! Now, I'm not in a rush to find the shear and waste a whole day on shearing one sheep at a time. Oh, my gosh it takes me forever, but I'm really afraid of cutting their very soft, thin, skin.  I'm not fast at shearing anything, including goats, pigs, of course-sheep, equine, and bovine. hahaha I mixed-it up. Okay, Capri!

My Marnie and her whole family just left day-before-yesterday on an eight week vacation. She HATES doing all the delivering. It seems she's always here when it happens and I'm gone. Honest, she calls the our missionaries to come help her and they do! They come in their suit and ties and love every minute of service helping her steady the mom and make sure she doesn't tromp a baby while in labor. Our sheep squat, not like any other I've ever seen. I guess it's because they're so fat with babies if they lay-down they can "turtle-up." This is a part of evolution I understand.  Marnie raised a veal calf for 4-H and she didn't mind one bit selling him off. He received the sweetest loves and open space, but Marnie didn't want to keep him at all. The bulls get so mean and scary.  She's the daughter that would love to not have pets but the strangest thing has happened, she's helped with almost all the lambs and lots and lots of goat birthing. She grumbles loudly, especially since they aren't her responsibility and very messy. Her children love all pets, especially horses and dogs. It's Karma that her son loves snakes, tarantulas, and turtles.

Everyone took turns and gave me bunches of Irish names. Kiely's favorite was Molly Malone because she sang it all the way through Dublin in her loudest voice with all her friends and people, complete strangers-- along the way, while they were riding in a horse-drawn carriage.  Mollie Malone, the little runt girl acted lethargic and just let the milk run-out of her mouth. Ma just ate away at her alfalfa and ignored me. I put her down on her legs and she "hopped" over to Ma and miraculously (ha!) woke right-up and nursed away. Guess she was tired of chasing her mother all night. Sometimes hunger makes 'em a whole bunch smarter. So happy. 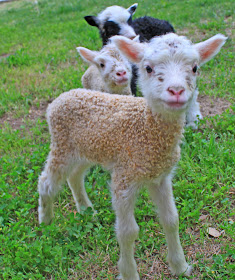 The lambs all have names now.

Yeah... I tallied them up and threw-out "corn beef and cabbage." as names. My grown children are not funny. And so, Clover is the black one, Blarney is his white bro and of course, "Sweet Molly Malone" the little half pint named after Kiely's favorite song of Dublin Town. Fits the lamb, "Alive, Oh Alive! Our ewe lamb survived.

Loving this Sheep Lesson for families.This is on Facebook and is called The Friend Magazine and it's from Church. A sweet story that involves more than just sheep. The story is Megan's Lambs and the Link is found on a Children's Church site, called The Friend Magazine. Great links and activities on Facebook and a link to get this picture to printed-out really huge in PDF format. 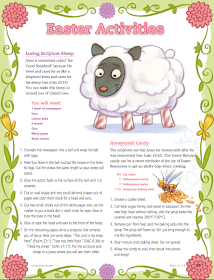 This link works to download the PDF file and
I don't know how I got it to stick. Great story
and only two pages and this link works. I downloaded it!

Steve's putting a little mesh, with tiny, square wires across the babies and Ma's pen with our magic ratchet. (Thank you Mr. Young the former FFA advisor for that great tip on the BEST farm tool ever!)  It's featured in the catalog, Gempler's. We're trying to keep Laney pup from nipping baby lamb's feet. 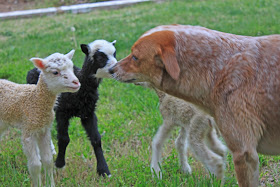 All day today Darby laid right by the stall and wouldn't leave. I took the lambs out (mother was flipping-out) The wolf was with them. She licked them, herding them all around the yard and got in a huge "I'm going to freaking kill you" fight with Duelly our wiggly male, Queensland. He didn't hurt them, but the lambs were hers. I can't figure that huge fight-out because he's Darby's lovey-doggy and his mind wasn't on the sheep or lambs because she's coming into heat. I know she thought he was trying to get the babies. I was holding them and she was walking with me and Duelly jumped-up to see me (he always does that) but today wasn't the right time. The "mother-bear" side of Darby came-out like I've never seen except with our "Little" Kiely's older dog.  Darby used to lay-down with "Little" our former protector of the flock and watched and learned from Little and it really did all rub-off on her. I just let Darby take Duelly-out and it didn't take very long before Duelly was on his back saying, "Uncle."  There wasn't blood, but I saw a "mean" that only comes from a mother protecting her babies. Kiely, your Darby is amazing!

I did all the chores. Steve really dislikes sheep (he says) but won't quit asking me about them, helped configure the water, even came home from church between classes to check on all of us. For FHE he's going to hold "the black sheep" tonight. I came in the door from taking pictures and he asked me why I didn't tell him I was going-out to use my big camera. He wanted to come along. 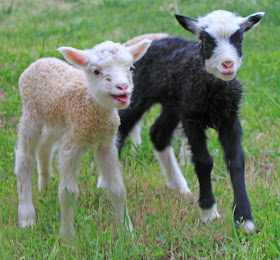 This is such a change for me from having so many children at home and then suddenly I'm just taking pictures of animals without children. My herd is teenie compared to the almost fifty sheep, with new lambs, four horses, donkeys, twenty-five chickens, and twenty-five full-sized goats and a buck, four pigs, two heifers, bulls, and numerous steers. It's semi-retirement and we're getting ready to plant in the pastures. The four goats are going in the Oak Grove with the sheep and horses. Okay, I haven't started the garden and my only excuse is I need my husband's back feeling better after his fall when he was on his brush fire incident. Now, he can give direction to a younger hired hand. My farm is smaller, but enjoyed by more. Eighteen grandchildren is about the best reason in the world to keep it going. I think I need more than five chickens.
Susan at 9:32 PM